You are at:Home»Festival»2013 Heartland Film Festival Breaks All Submissions Records, Announces Partnership with ShortsHD™
By heartlandfilm on August 13, 2013 Festival 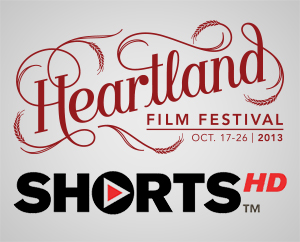 Submissions for the 2013 Heartland Film Festival (Oct. 17 – 26) have smashed all previous records across multiple categories. Heartland’s success has grown substantially over the years, with an overall increase of 151 percent in submission numbers since 2009, thanks in part to the Festival’s selection as a qualifying festival for the Annual Academy Awards® in the Short Films Category in 2011. This means that the winner of the Grand Prize for Best Narrative Short Film will qualify for consideration in the Short Films category of the Annual Academy Awards® without the standard theatrical run, provided the film otherwise complies with the Academy rules. Three 2012 Heartland Film Festival Award Winners were selected as nominees for the 2013 Academy Awards® and one, “Inocente,” won the Oscar® for Best Documentary, Short Subject.

Records were broken in the following categories:

Known throughout the industry as a “filmmakers’ festival,” the Heartland Film Festival (Oct. 17-26) will add even more opportunities for independent filmmakers as it partners with the ShortsHD™ network to offer select short film category winners the opportunity to be featured in blocks of festival-themed programming later this year. These films will also have opportunities for distribution via iTunes and Amazon Instant Video.

ShortsHD™ is the world’s first high definition short movie channel. Its programming is categorized into one-hour and half-hour themed blocks that cover a variety of genres, including comedies, musicals, documentaries, thrillers, dramas and animation.

“We are extremely excited about our partnership with ShortsHD™,” says Tim Irwin, Heartland’s Artistic Director. “Heartland is proud to be working with a partner like ShortsHD, a vocal advocate of these amazing, often overlooked short films. Between this new relationship and our Academy Award® qualifying status the Heartland Film Festival is really making a name for itself within the world of short films.”

“As a kid who grew up in Terre Haute, there couldn’t be a film festival I am more excited for ShortsHD™ to partner with than the Heartland Film Festival in Indianapolis,” says Carter Pilcher, Chief Executive of ShortsHD™. “Each year we work with the Academy of Motion Picture Arts and Sciences to release the Oscar® Nominated Shorts Films in theatres across the country, and Heartland’s position as an Academy qualifying festival makes it a key partner in efforts to promote the world’s most entertaining short films and the short film rock stars who make them.”

Select films from Heartland Film Festival will be featured on ShortsHD™ later this year.

About ShortsHD™
ShortsHD™ is the first high definition channel dedicated to short movies and is available on DIRECTV (Channel 568), and AT&T U-Verse (Channel 1789). ShortsHD™ is operated by Shorts International, the world’s leading short movie entertainment company with the world’s largest movie catalogue dedicated to short movies. Shorts International also operates ShortsTV™, which is available in France, Belgium, Luxembourg on Numericable (Channels 134 and 52) and in Turkey via TTNET’s Tivibu service.  Shorts™ is the short movie on-demand service available on iTunes movie stores in the US, Canada, Mexico, Japan, Taiwan and throughout Europe. The company is headquartered in London, England with additional offices in Paris and Los Angeles and is led by Carter Pilcher, Chief Executive. Shorts International is owned by Shorts Entertainment Holdings and Liberty Global Ventures.